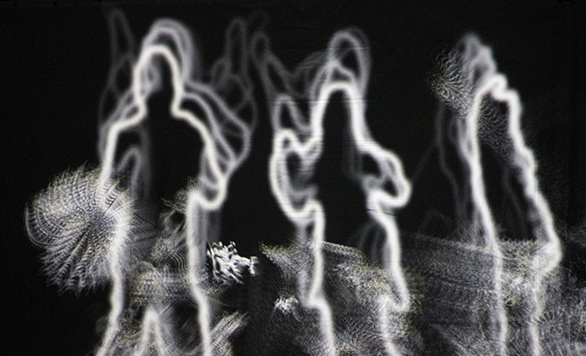 Tangible bodies is an original artwork between human experience and interactive installations. This proposal involves the first expression of our presence to the world through our sensual and technological body. Here each individual is considered as a whole alchimy between the spirit, the soul, the heart and the flesh. 8 poetic, playful and interactive installations are intended to allow all the public to experiment their relation with the gesture and with others, their intention power. Bodies, immersed in the behavioral device, reveal in real time, sensitive worlds which react to the presences, even to the voice, thanks to the technological tools. Each videoprojection/installation might be submitted independently.

Corps Métaphysique
▶ Individual interaction or in group
This board evokes abstract elements, aura, ghostly bodies, energies. An aura develops around the projected silhouette by one or several participants. The participants movements act on the shape of the enveloping aura, and on the tints of this aura. If there are several participants, interactions and energies exchanges between silhouettes appear.


Corps Apparent
▶ Individual interaction or in group (up to 4)
This board mentions the topic of the appearance, the one that we try to give to ourselves, the one about which we dream, the one that we perceive, the one which gives us a complex or not… As a distorting mirror, participants silhouettes (until 4) appear and change shape according to their displacements and their movements. There are interactions between silhouettes (and thus between the participants) when they have contact or get closer. The board encourages to play with shadows and silhouettes that are going to become exceptional according to the emitted movements and the body presence : arm which lengthens and drills, foot which becomes enormous etc… The body plays with appearances with humor.


Corps Virtuel
▶ Individual interaction or in group – Wall or ground projection
This digital environment composed of 0 and 1, reminds a computing codes aesthetics. These symbols revolve around the participant when he/she passes, forming circles around him/her just like the circles that we build ourselves on the on-line networks. With several participants, weavings between bodies become network of communication.


Corps Social
▶ Individual interaction or in group
Every participant is invited to mime a scene or to dance during a recording time. His/Her silhouette in movement, kept on a video loop, appears then in a color compartment on the screen as in a room of a doll’s house. In every passage / recording, silhouettes fill the 9 color compartments which at last disappear to show silhouettes with scale 1 joining them to dance altogether at the bottom of the board. Then, the compartments filing cycle begins again and again.


Corps Chamanique
▶ Individual interaction or in group – Wall or ground projection
Black and white forms represent fantastic animals, under simple forms. These animals swarm and bubble around the participant when it enters into the projection space. They agglutinate on him. At every step or kick, the forms splash and eject around his/her presence according to the density of the movement. If a second person interacts with the board, the forms divide up and react to the movements of each one, emphasizing exchanges between the participants. In absence of participant, animals evolve in a slow movement.


Corps Anatomique
▶ Individual interaction or in group
On a white background, black arrows look for a body which is not here yet. They move, looking for a body towards which to point. A participant comes: the arrows point towards him/her, follow his/her movements, move and position for ever to track him/her. If a second person comes, arrows react, oscillate, divide up between the two silhouettes or choose to follow only one. This board is the occasion for the participants of movement games, of enjoying to cause the arrows behavior and observe them.


Corps Géométrique
▶ Individual interaction
Stars flows move slowly on the board. When a participant gets closer, bright points, looking as stars, move and finally aligned themselves to build the skeleton of the body’s participant. Stars move, according to his/her movements, and stop to form a constellation which gets loose from the body and flies away in the projected sky. Every trace of a participant passage is captured. “Points stars” have autonomous movements, reactions to body movement, elasticity. The game can consist in taking a variety of postures to try to construct varied stellar constellations.


Corps Emotionnel
▶ Individual interaction or in group
The participants interact on the projected image thanks to their voice, their presence and their gestures. The sentences, the words said in a microphone, associated to the captation of the movement, of the presence cause variations in the flows of colored particles and make them move from the detected bodies and from the produced movements quantity. Therefore, fluctuating, dreamlike and abstract landscapes are born, constantly renewed. The particles variations (speed, quantity…) vary according to the sound volume, the held sound and the “spect-actor” behavior.